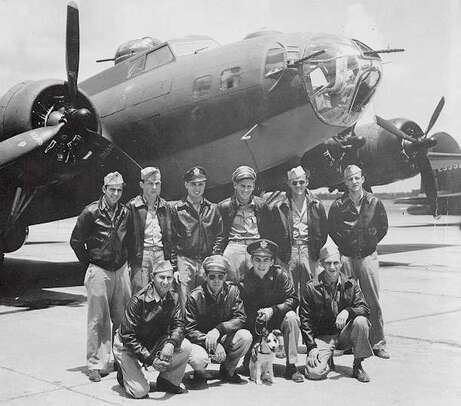 A typical American World War 2 troop with adopted terrier mix mascot.
HISTORY OF THE BREED
World War 2 was very hard on everybody, including dog breeds.
Many were let loose to survive on their own. These dogs interbred over those 6 years and some were adopted by American soldiers to keep them company and be a reminder of home.
Possible breeds (that could survive on their own during the war and actually existed in that part of northern France at the time) that would have contributed to the creation of the Kromfohrlander include Briquet Vendeen, English White Terrier (the foundation of Parson Russell and Fox Terriers), Poodle, Beagle, Berger des Pyrenees, Schnauzer and Brittany, which would have made the smooth variety possible.
Through the generations, the natural instincts to hunt or herd were subdued and thus a breed with moderate to very little hunting instinct and the deep loyalty and sensitivity of a much smaller companion dog was developed.
The Kromfohrlander (Krome-fore-lahn-dair)  is a medium-sized dog breed developed in Germany in the 1940's and 1950's after World War 2. It is the only breed of dog descended from a beloved US military troop mascot. The foundation dog "Peter" (also called "Original Peter"), a scruffy farm dog, was found by US ground soldiers as a stray in northern France.
During WW2, USA President Franklin Roosevelt brought his dogs (an Irish Setter and a Scottish Terrier) with him everywhere he went (considered an unnecessary expense by his detractors). Soldiers interpreted this as a 'green light' to adopt their own therapy animals at camp and in the field.
Stray dogs, cats, chickens, goats, donkeys, snakes and monkeys were adopted by soldiers all over the world to comfort them during the stress of war. Peter served as one of these valuable 'Morale Builder, First Class' mascots during the liberation of France.
Most military mascots were dogs and cats (or their puppies/kittens) that had been abandoned by local civilians, who could barely afford to feed themselves during the war.  In rural areas, terriers, hounds and herding type dogs were most common , breeds that are adaptable, tough and able to fend for themselves. Peter was the likely product of those types of dogs.
Peter's journeys with his troop brought him across the border into Germany at war's end. Nobody knows why or how Peter left his 'boys' but it is likely that he'd had enough of military service and he went AWOL ('away without leave,' in military lingo).
Back to being a stray, Peter was found by local German men who were about to kill him but he was lucky to be was rescued by Ilse Shleifenbaum, wife of a lawyer in Seigen, Germany in the state of North Rhine-Westphalia. 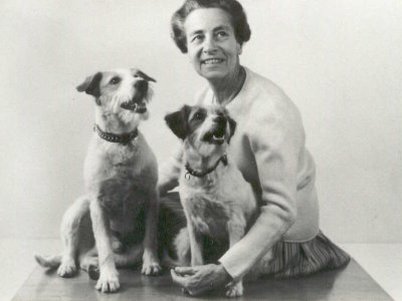 Ilse Schleifenbaum with (most likely) Bento and Zottel (both vom Wellersberg), circa 1951
Ilse named the breed for the local landscape ‘krom fohr’ ('crooked furrow'), which she thought was a catchy name! She was committed to creating a quality companion breed of consistency, long life, good health and fine temperament. She worked diligently for this goal for 10 years with her friend Otto Borner, who had tasked himself with helping restructure the German kennel Club (VDH/Verband für das Deutsche Hundewesen), after the war. The international federation of dog breed clubs, Fédération Cynologique Internationale (FCI), rewarded their hard work with full approval of the breed in August 1955. She was adamantly against having a breed club, instead wishing for the breed to only be a hobby and not a business venture for anyone.  Big kennels that operated like businesses were not for this breed. She must have foreseen that the built-in limitations of locations, shallow pedigrees and (now) the required health clearances would guarantee such a thing, with ethical breeders that are familiar with her ultimate desires for the breed. Even so, a very protective breed club in Germany was formed with her involvement.
The Kromi was founded in Finland in the late 1960's and Austria, Sweden, Denmark and Norway followed. Some were imported to France in the late 2000's. The first Kromi in the USA (a smooth) was imported in 1998 and the project ceased within a few years. Kromfohrlanders were re-started in the USA in December 2012 with 2 male puppy imports from Denmark.
The breed's name is spelled Kromfohrlander in English speaking countries, Kromfohrländer (or Kromfohrlaender) in German speaking countries (where the plural is called Kromfohrländern). Pronunciations are 'Krome-for-lahn-der' and 'Krom-for-land-er.'  Nicknames are Kromi, Lander and Landeri (Finland).

Kromfohrlander History in the USA 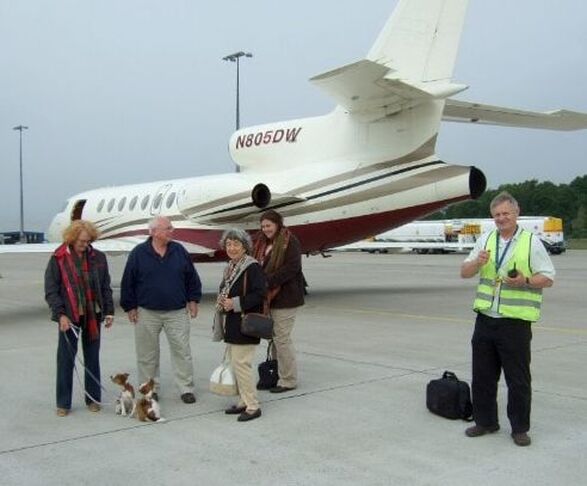 The First Kromis in the USA

Pilot and top patent law attorney (and all-around nice guy), Eugene Cummings, discovered the Kromfohrlander in the mid-1990's while visiting his friend (fellow crime fiction lover and pilot) in Germany, Heimke Thiel (breeder of vom Strithorst Kromfohrlanders). He brought back the first Kromi in the USA, (smooth) Button von der Britzer Muhle. He had been interested in getting the Kromfohrlander established in the USA but had no experience in navigating the dog show world, so he had it as his own hobby and kept the puppies he had from his own pair of Kromis.
Shown above is (L to R) Heimke Thiel, (sister) Barbara Cummings and (assistant) Elizabeth Rynne. Both Gene and Elizabeth died in 2021.

The Sequel: Let's Make it Work This Time!

Artist and entrepreneur Mary Dixon was founder of The Australian Cattle Dog Rescue of Michigan (one of the first breed-specific dog rescue groups in the world) in 1990 and ran it until mid-2004. She started in dog obedience in 1993 with her first rescue ACD and did conformation showing in ACDs from 1995-1997. From 2008-2004 she showed and occasionally bred Border Terriers. In 2005 she got the Portuguese Podengo Medio (wirehaired) get its start in the USA (until 2011). In 2007 she helped the Berger Picard get started in the USA by providing moral support and guidance to their club president and, that fall, importing 5 puppies by herself (first time going to Europe!). In 2010, she was looking for a smaller companion breed and her friend (Ginger) in Podengo Pequenos (Wirehaired) knew about Kromis from living (and showing dogs) in Luxembourg and suggested she check out the Kromfohrlander, bred by her Podengo Pequeno-owning friend in Finland. Some more searching found Helene Kjærsgard-Jensen (Hoolahops Kromfohrlanders) in Denmark and in December 2012, Felix and his brother Fletcher, arrived at Dulles Airport in Virginia, with Helene's sister Ida. In March 2013, a chance meeting with Donna Walker (at the benched Detroit Kennel Club show, where she put on a Meet the Breed for Kromfohrlanders -and- Podengo Medios at the same time- just her and other half Steve) led to her going to Finland in July that year to bring home Hummer from Tiina Koponen (the afore-mentioned friend of Ginger, Krumme Furche Kromforhlanders). In 2014, an inheritance allowed her to travel to Europe 3 more times to get Kromi puppies. First came Dahlia (Denmark), Jenji (Finland) and 3 siblings Biju, Krystal and Maze (Denmark). She bred Krystal to Hummer in Summer 2016 and had the first litter of AKC Foundation Stock Kromis in the USA (as Birkenstrand Kromfohrlanders, named for their family's summer beach house in northern Michigan). 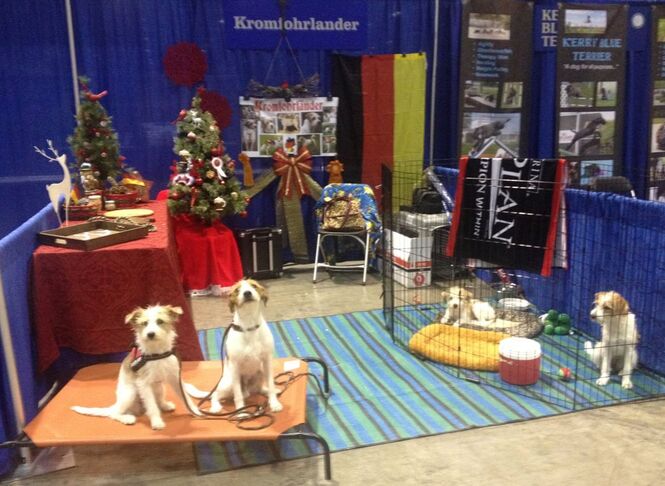 We brought the German snacks that year! Orlando, Florida, December 2014 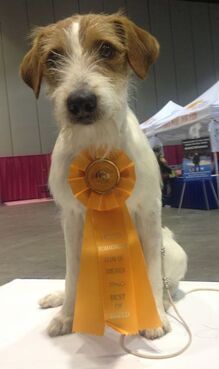 Felix and his Best of Breed ribbon, Orlando, Florida, December 2014